One of the many reasons working at the Cathedral is wonderful is because every now and then a member of the public finds old photographs showing the Cathedral and its grounds and they kindly bring them to show us. 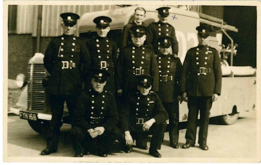 Frank Brown is shown at the back on the right 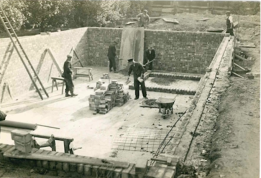 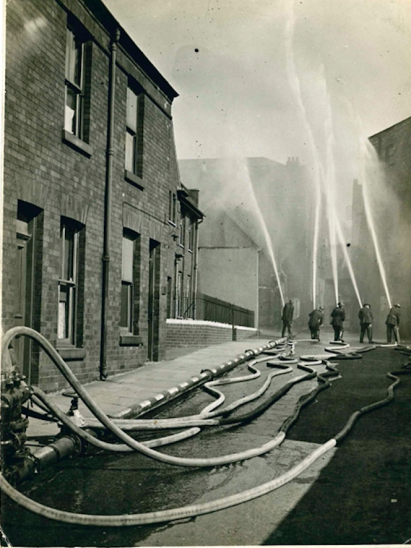 Myself and the team always pour over the photos, piecing together bits of information and seeing how it compares to the present day.

A few weeks ago, Susan Taylor from Lincoln found a collection of photographs dating back to the Second World War belonging to her grandfather, Frank Brown. These photos were incredible as they showed the local fire brigade building the Cathedral’s original underground water tank.

Frank was part of Lincoln fire brigade at the time and the photos showed him and his colleagues helping to install the tank, which was built so there was access to large amounts of water should the Cathedral be hit by air strikes during the war.

In the photos we can see that the team piped water all the way up the hill from Brayford Pool to fill the tank which is quite a distance!

I’m told by Susan that Frank and his brigade stayed in Lincoln during the war to protect it but they were also called down to London to support the other-whelmed local fire brigades during the Blitz.

It’s a really interesting story and I found it touching to think all those years ago in times of conflict, our local fire brigade and Susan’s grandfather were working hard to protect our city and our marvellous Cathedral.

Finding these photos is great timing as the old water tank brings with it some further good news; we are offering the local community the chance to be involved in a Cathedral excavation!

The water tank shown in the photographs has been redundant for a long time and to make way for our proposed plans for a new visitor’s centre, the tank will be carefully removed during a community dig next year.

The dig will be run by professionals and overseen by our archaeological consultant but is a rare opportunity to experience first-hand what lays under the Cathedral’s grounds and become part of its history. The really exciting part is that this excavation will hopefully reveal historical information from the period of the Second World War and aspects going back to the 13th century.

More information on how people can get involved in this dig will be shared in due course.